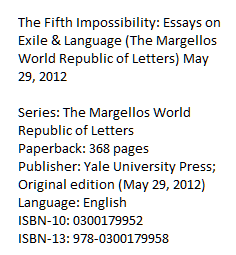 When I bought this book I was in serious depression mode. I felt I belonged so in glee I pressed ok, buy. I live in a so called ‘foreign’ land and I ache for my ‘motherland’. The attraction was mutual. Then. Time passed.

I was vulnerable. So I forked the bucks through my Kindle tablet. Do I regret it? Sort of kinda of, not really. I really liked it. It’s juicy in details which makes my mouth water for stuff such as this. I understand the longing, the constant battle of identities because of the languages, I get it. The exasperation of the Cold War stuff as well. In my younger years there was nothing to consume but intricacies of the Cold War and the ‘Liberation’ of the nations from the yoke of the USSR. I wasn’t there with them but I saw in it on the tv and read it in the Californian papers like the very lightweight San Jose Mercury News which seemed a baby compared to the San Francisco Chronicle and a few others like the NYT or WSJ. I lived it through the lenses of the many white men who spoke on those behalfs back then, Foreign Affairs whatnot. Not to say its the same.

Although seeing live on the tv news of the fall of the Romanian dictator Nicolae Ceaușescu and the drama that ensued his downfall, as we in America felt a glorious feeling of liberation that we helped the world rid itself of the commie scums, well, one can’t help but not remember their ill fate as they faced the firing squad as we felt pitty for his wife, Elena Ceausescu. It isn’t until these last years that we get a slight glimpse of those last seconds of the Socialist Republic of Romania. Paratrooper Ionel Boeru, the couple’s executioner, has come out to tell us those last seconds of that republic.

Boeru says it was the 29 bullets from his AK-47 rifle that killed the evil president and his ruthless wife Elena when they were lined up against a courtyard wall and executed by firing squad. Then an army captain, Boeru remembers how the 71-year-old tyrant was smartly dressed and smelled heavily of aftershave.

“Ceausescu’s last words were, ‘Long Live the Socialist Republic of Romania, ­independent and free’,” says Boeru. In contrast Elena Ceausescu smelled badly of body odour. And her last words were far from statesmanlike. “She yelled at a soldier, ‘You motherf****er’,” he says. Boeru, now 56, rarely talks about what happened on Christmas Day 1989.

We were told by Cold War propaganda what occurred there but not through Jewish eyes. They seem to somehow be in the wrong side of history on this side of the planet, that is, Europe. No matter where or how, place of time, it ails the Jewish lot. So to hear their voices of those persecuted by communism and the Soviet aftermath tell it, well it offers a window into the many hows which otherwise remain locked up in the silence or the few circles which roam said stories.

Where does the mesh occur indeed. Where does memory begin and where does makeup land start worst yet where does the nostalgia begin which if not careful can turn into romanticism? I do not know. But I understand their plight. Their moves. America though in its infancy is yet to suffer the lot of Europe. Not that America as a continent hasn’t suffered persecution for ideas or thinking or mass deportation, ethnic cleansing whatnot. One ought to be thankful for it not becoming a preferable habit of sorts as in much of European history would indicate it. We Americans long for Europe because it was the hell of the many.

We long to bathe in its past yet the shore is long away. Still, when we wet our feet we question the father. I, for example, wonder why does the European lot need to compare their linguistic achievements to us? We are not the same there. We are a lot that abhors the language imposed upon us. There, the European Jew has lost touch or sensibility. It, does not know, our lot. We did not ask for English, nor Spanish, nor Portuguese. We had our own languages. We still have our own languages by the miracle of persistent and rebellious attitudes towards the imposer who punishes us by infringing our rights to think and develop in those languages. And if money is poured unto said languages it is only to ‘rescue’ them from extinction though they be only left 5 old speakers whose fate and moribund souls must suffer the hell of reviving their languages through he insistence of the speech recorders. I was particularly peeved  by Ephemeridae.