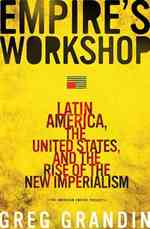 One hardly sees so many subtitles on a book, but in Greg Grandin’s book, Empire’s Workshop, we do. More aptly, we are bombarded by the word Empire, just in the cover book we find it three times over. I resisted this term because I have a hard time believing that the US is a design meant to be an Empire, not yet anyhow. Our western narrative has made sure that empires are not good, that its ultimate destiny is to unravel into oblivion. Asimov what not. For a country based on Republican values this tends to send shivers down the spine of the few who retain nostalgia for the Old America.

Even more appaling regards visuals in the book is the flag of the US in an upside position which to most knowledgeable people means distress. Perhaps the more succint example of this kind of flag use is best described by the movie titled the Last Castle where Eugene Irwin (Robert Redford), “a military hero by all accounts, is killed for calling attention to atrocities committed by ugly Americans.”

In Empire’s Workshop, Grandin describes the US as grappling for its very soul. Grandin’s book is a refresh button for us that have enough RAM that stretches back a while. A fortysomething book perhaps, a book for the ageing X generation or university students taking foreign relation courses. It is intented to be provocative not because it opens old wounds but because it details how the wounds were opened in the first place. Both physically and spiritually.

Grandin analysis how Latin America has served as a training ground for its Empire designs. I suppose I am to be appaled by the atrocities being commmited or that were comitted, documented and all; pondered upon, at times, in huge swaths, in Grandin’s book. [He tends to get ahead of himself at times]. Yet the fact of the matter is that personal psychology helps little in this case. I can feel disgust at what the narrative so vividly brings fourth, but let us face the facts, I was not in in El Salvador, Guatemala or Honduras nor belong to the upper echeleons of the Latin America créme de créme hence little simpathy can be drawn from me there either. I have long known that the rich class of Latin America is far from being the patriotic ideal spoused by any decent country in the world whose foundations are based on Republican values.

Suffice to say, after reading the Latin American passages I find it rather ironic that those very mercenaries the US trained during the Cold War are now at the service of the mexican mafia, Kabiles I believe they are named. Or that Ecuadoreans are serving as hired guns to protect the Green Zone. Which is kind of actual as we speak now.

On a slight humoristic side, we are reminded of that great actor of our times, Ronald Reagen, in an astonishing manner tha it provokes the imagination to believe that perhaps Reagen kept its senses to the end while we believe it to be otherwise, purposesly or not. Is Elvis in the house?

Spiritual wounds are ones whose core is always open. There is no closing. Grandin maps, however crude, America’s eternal mana, predestination. The problem with predestination is that it never achieves a climax. There is always more one is predestined to do. But allow us to assume that we have achieved the goal set. And this is where the problem begins because the job is never done. So we are asked to envision the unimaginable. Worse yet, Grandin assures us that the US Empire design proyect is unfullfilled. Except that perhaps we have now turned a corner, flipped a coin what not. Lull before the storm etc.

Like I said, I suppose that one can be appaled by the atrocities Grandin describes in Empire’s Workshop, it is, after all, in our christian nature to deplore crimes against humanity. Consistent with our times open debate about christianity in our present time, I suspect Grandin also suggests, however slight, that predestination mechanisms are being used for ill purposes. Our modern day theocracy maluses the most common drive in America: the belief that we are meant for something aka we are predestined for schemes alien to the founding fathers intentions of our beloved land. Grandin never mentions the Calvin in all of us who nurture America in our hearts, but somehow he insuniates in the narrative that we are a herd whose leaders are awry.

Lastly, I was amused by the Mary Shelley prologue quote. Shelly warns us that resurrection is futile. No matter how grand our proyect. Yet Frankenstein remains in our minds, forever, no matter how monstrous the beast is. Is Grandin suggesting that Empire is not a business the US should not be resurrecting?

As an American myself I have always mulled the fact that we are a new race of people. It would behove us not to imitate the dirty concoctions of our European ancestors. We ought to come up with grander designs for our continent. I hope we do so.

This entry was posted in Libros, Libros en Inglés. Bookmark the permalink.
error: Content is protected !!