Reprinted and altered with the kind permission of the author, Julio Sueco. Originally published Jan 31 2006. 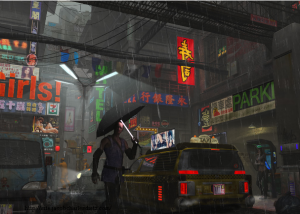 We didn’t give a fuck.

The cop stood outside the patrol car for a sec or two, hand in gun ready to shoot at us the moment we made a false move. We were brown and we had a 1954 red Chevy truck with chrome tires in a toll road built just a few months ago before the new year’s eve 2034. I saw his glasses reflect the lights of the Chevy in his black, what looked like Mark Vinci of Italy, design eyewear. I remained cool, rolled down the window and waited with my hands clearly visible on the chain steering wheel. What the stupid white cop didn’t notice was the stealth motor on my Chevy. It didn’t even sound on. The moment he approached to ask his dum racial apartheid questions I pressed the accelerator so hard he didn’t even get to see the color of my eyebrows. All I saw last was how his hand reached to his holster. We were too far for any shots to be heard by then.

I was in a jam and needed dough fast and now, so I hooked up with a few acquaintances while I climbed the social ladder. They’re easy going, simple folk who didn’t care too much for the infectious lifestyles that Hollywood cried out for. Yeap, these folks, like my folk, cared just for one and one thing only, their own. I on the other hand have always wanted to transcend borders and always wanted to go beyond that which my xente gave me. So I said yes. I would, no big deal. The only obstacle was to come across the border. A thing I had been doing all my life. It would be a nice payout which was to give enough to take care of my current problems.

I really don’t know when it all started but I heard enough stories to know it was not all that long ago. The walls were 2 stories high, a kilometer wide and made a part of the landscape were I was born. To me, like the sea, they had always been part of the environment I called home. The government, spearheaded by what then were known as hawks, institutionalized a de facto state of emergency on the nation. Today they are just called Patriot Citizens. A little structure that got its idea out of a former red committee outfit which gathered information on everyone the minute they stepped unto this earth. You were born into it, like being a Catholic, you know? It basically erased out of history more than 200 years of good sound democracy but hey! who cared? It was history to me, things schoolbooks I read said. So long as Hollywood produced good comedy, democratic stuff like voting was a geek thing, an act ridiculed by wealthy middle class snobs and cool dilettantes. More guards were busy at the Tijuana crossing point then at any post across the divisive line that separated the two nations. I always passed no hitch, get my drift? So anyways, those stories made more sense now. I was nervous and needed a cause behind me. I heard my grandma’s voice tell me of those gone yore days. How the gringo suddenly erected the wall. How thousands of Mexicans were shuttled across the border in an ethnic cleansing sweep that would make the Israelis and Serbian leaders of the 20th century green with envy. They had God on their side, but my uncle always quipped: we have God’s mother on our side.

I had to device a way to cross the border on my own terms and without being detected. He said clearly: you get busted for this, you end up away from here in flesh and spirit forever, they’ll clean your brain out nice and clean and Human Right groups will have not a thing on them since they will leave your body unscathed, get me? Kinda like Code 46 like?

The night fell, and after the high speed escape I was tired from the speed I drove the Chevy. I was totally drained. I came home, México, to my futon, hit the light switch and as I faced down the pillow the door bell rang. What the? I opened up the door after checking who it was, Sheila came in. She wanted to talk, but my ears and eyes zoomed into her cleavage. Her breasts always talked to me better than her mouth, or was it the other way around? My fantasies always confuse me. This time though, I reacted. The nervousness of passing contraband kept me more sober than ever. Come in I said as she walked straight in and her body left a trail of an intoxicating fragrance as I walked behind her, Poison I thought, my fave.

– It’s nearly one in the morning watcha want?
– Bill kicked me out of the apartment, he has a new chick with him now so am ancient history. I need a ride across the border, can you fix that?
– Can’t do honey, gotta split early there but I gotta do it alone, so I can’t help you, sorry babe.
– I’ll pay you good, you know those bastards at the crossing don’t allow pedestrians anymore on the the weekends and Monday is so far away from now. Come on baby, I’ll do anything you want me too.

Ok, so this is a nice set up I thought. The girl I always wanted is offering herself to me of all nights tonight.

– Tell you what, you sleep over there and in the morning we split 7am sharp, get my drift? I’ll take you across. Hand me over the dough now and we call it even right? You got your papers in order? I don’t wanna get stuck in Homeland Security Detention because of you.
– Off course I do nincompoop, come here, lemme give you a kiss in the mouth.
– No thanx babe. It’ll do seeing you naked but no touching.

The night went smoothly. The ultra marine dress slipped out of her body and out bounced her breasts like two firm well done cups of jell-o bouncing extra extra in the semi dark room. She handed me over her panties. I sniffed their delicate fragrance as I stroked harder and harder inside my pants. She looked at me beginning to masturbate and she began to caress her breasts as she sideglanced at me. The more I saw her do it to herself, the more I got into it. I got lost in my thoughts seeing her legs spread wide open. I felt heat and sweat beginning to build up in my body. Her hand slid down, her fingers playing with her pubic hair one by one. She laid down on the brown carpet. Her ass jumped up and down hitting the woodfloor, thump, thump was all I heard the closer she came to an orgasm.

By the time I woke the clock struck 6:45am and Sheila was no were in sight. She had scrammed. She took my Lowrider magazines from the 1990s and left my place all messed up. I was knocked out with gas. No time to think, my head hurt. I dressed up and ran to my truck to meet up with the Dropper. I still hadn’t figured out a way to get those 30 ounces across.

I came around to the cul-de-sac where the dropper was, a simple looking farm picker it seemed, but then again his revolver was quite visible. I got out of the car and started to walk towards him. The air was fresh and the morning dew could be seen in the grass, the Dropper had huaraches on.

– What up ese?
– Buenos Días, here’s you stuff.
– What’s this shit?
– Be careful, you don’t wanna be caught with that, you’ll liable to end up in problems. Don’t open it, no matter what, just take it across and there you’ll meet Chilangito. He’ll take it from there.
– How am going to pass it?
– That’s for you to figure out, the product is expected, so hurry up ese.

It wasn’t bigger than a zip it bag, and it weighted exactly 30 ounces. I didn’t even know what it was and I was expected to cross it over. I put it inside the headlights, so long as I didn’t turned them on there wasn’t going to be a problem, although it did seem a little bumpy. I’m hardly ever stopped, so I headed towards the border. It was jammed packed. Cars were cutting each other like old times. I was tempted to do the same, but I didn’t want to raise any suspicions. This time I had something to hide so I played the good citizen.

The imposing walls freaked me out. Though I have always seen them, their brown exterior seemed a little more soot stained than before. Pinches güeros would say my grandmother everytime we passed through them, as if we were to take back all the states they robbed us. She was keen in reminding me that all the time.

I came up to the migra and extended my papers. Dogs sniffed around and it all seemed as if I was about to get the green light as I got my mica back when the dog got a whiff of something and turned his head. He jerked the migra so hard the agent had nothing else to do but follow the K9. I pushed the accelerator on the go and I took off. The kilometer looked like ten freaking kilometers. The last I heard was ‘step aside’. Deep into Sydro I ran out of gas but by then I had left the car abandoned in the gas station and hopped unto a bus.

When I came to the drop off I saw that the bag was nothing more than a bag of pistachios. A local mob chief liked them natural and every since they introduced the law that genetically altered food items US markets delivered nothing more than genetically altered food, real pistachios were the thing to covet see. La Migra was like a detente of sorts for the Genetic Food Industry. They alleged that natural food was unfair competition and made sure their lawyers were in cahoots with the government. They passed laws that punished with jail, years wise, anyone trying to smuggle natural foods into the US.

I got paid ten grand for them. I got back to the gas station and saw that my car was still there. I headed back to the border after I painted my car another color and changed the license plates. I was richer but no better off. Pinche Sheila came to mind. What the fuck did she want? It was then it hit me. Sheila worked for the Genvittels people. How the fuck did they know I was to make a delivery? I could either tell my xente or keep quiet.

This entry was posted in Minifix. Bookmark the permalink.
error: Content is protected !!