I think I insulted Rome when I said to myself that it bore resemblance to México City. It’s right down dirty and ugly at first sight. Except the dirtiness looks prettier in Rome because, well, it’s Rome. The imagination just takes off had Italians been the ones to conquer México and not Spaniards. I haven’t walked that much around Rome. It’s my first day but the places I’ve been to remind of the poor and disorganized and neglected areas of México where nice places clash with poor & neglected ones. Right smack in the middle of everything. Prada meets soot or Dolce & Gabbana meet deteriorated.

I found myself criticizing people by the Piazza di Spagna. Or their choice of shoes eitherways. I stood on top of the stairs by the egyptian obilisk called in italian as L’Obelisco Sallustiano which overlooks the whole scene as well as Keats and Shelly’s house. I wonder why people insisted on wearing uncomfortable shoe wear in cobbled stone streets. I mean I wore my Doc M shoes and they felt rather tiresome. So I figured the gals in high heel shoes had it worse? Not to mention the guys in boots. So am walking expecting the wow to hit any second & all I could get is the same old. People in awe for marble in different shapes. Am tired of marble so I look at other stuff instead. Which I can’t manage to capture, by the way, on camera. I took a few pics and then it dawned on me. I began to see people posing for the camera everywhere. Welcome to the new age. Everyone is a Kaplan these days. Including me. Which brought an insight, mind you, about my ethics. One of the things you see as a tourist is how much money other people ostent by the gadgets they use to collect memories. I always fall for that to bring down any shred of self confidence in me. I surmised the worst in me. Not because it may not be true but because it is true. I figure my ethics are volatile. They are on their own Wall Street.

So on my first day in Rome I pretty much got my bearings straight. I managed a lot without too much disorientation.

So many things have happened since I last wrote. So many things only the camera knows what I have been up to. Suffice to say I went to the beaches of Rome. I have fallen in love with their paninis and I have been to numerous places of which I have highlights left and right. Though these movements have been marked by stress and lost time on streets I walked in circles. Goes to show the city is hard to learn. One observation is that while it is easy to traverse the city on the Metro it is far from certainty one can master its streets. Rome is plays hard to get. Today I’ve been to Percy B. Shelly’s tomb. & Keats too. But Keats has never been the influence on me. I have always been more influenced by the Romantics. I’ve seen several expositions by Cezanne and Modigliani as well as the vatican museums. I think I have been more awed in San Francisco than in Rome when it comes to that respect. 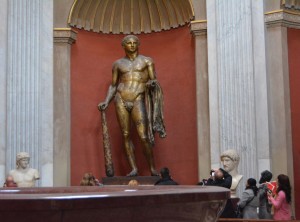 Hadrian has made its presence as well everywhere, I am glad to have read so much about him during 2013. He makes life so such more interesting. I was pleasantly surprised to have found his bust along that of Antinous quite prominently side by side in such a place as the center of the Vatican  (Sala Rontonda, Inv. 251) considering that those two are perhaps one of the best known gay love stories of that era. And yet there they are. Together.

What else? I was peddled by a fat man on a vespa by the Tiber near Ponte Sisto to buy a stolen Iphone. I got drunk by the Vatican and kissed a girl whom I have a vague memory of & regret not having taking a picture of. I took a taxi really drunk and made it to Hotel Aniene (Conca D’Oro) quite safely. My Hotel area looks really shady but am sure it’s just me being “westerny”. Otherwise it’s just the old hangouts everyone else has been to on their journey in Rome.

I actually am surprised that I blend in so well in Rome as I do. I speak, off course, about the color of my skin. Be that as it may, In Sweden, color does matter. I am a foreigner and the fact that I do not resemble the rest haunts me like the KKK everyday. I live it, I breathe it and I stand out because of it and if there is something wrong with society the blues eyes tend turn to turn towards the likes of me. So it’s kinda nice to be just one more of the gang until I open my mouth. & wasn’t expecting Italy to be this brown. I mean, judging by RAI there are plenty of white folk to go about. Yet as one traverses the streets of Rome brown is its name.

This entry was posted in Travels. Bookmark the permalink.
error: Content is protected !!